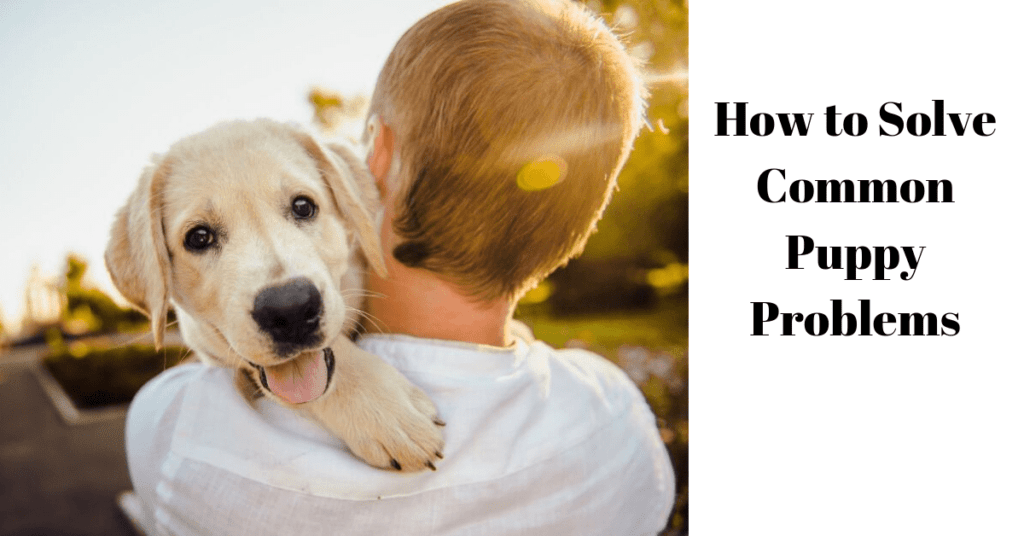 How To Solve Common Puppy Problems

Having a puppy is a lot of fun, but sometimes you may run into puppy problems. If you can’t solve the problems, having your puppy might go from being fun to being frustrating. In this article, we will look at several common problems that owners have with their puppies, and things that you can do to help.

Once you have solved the problem, you can go back to enjoying life with your fluffy little friend.

Some puppies bark and bark and bark, and will not stop no matter what you do. This is very frustrating, especially if you are trying to sleep. Fortunately, there is a way to help the puppy stop barking.

There are a number of reasons that puppies bark. If you can discover what the reason is, it will help you to keep the puppy quiet.

Alert  - Sometimes the puppy is barking to let you know that something is happening. Perhaps there is someone outside. This kind of barking is good for a watchdog. But the dog may need training to help distinguish between intruders and people going about their normal business.

Stress - If the puppy is upset or uncomfortable, he may bark to express his frustration. If you can discover the cause for the puppy’s distress, you might be able to fix the problem. Maybe she is cold, or hungry, or doesn’t feel safe.

Excitement - Puppies can get excited very easily. Barking is one of the ways that they show their excitement.

You can train puppies to stop barking by following these steps.

Anyone who has had a new puppy has probably had the puppy chew and destroy something important.

Puppies do not chew on things because they are bad.

They chew on things because that is what puppies do.

There are some things you can do to help the puppy stop chewing on things that are valuable.

First of all, you should realize that puppies like to chew things to make their gums feel better. So you should make sure that the puppy has lots of appropriate chew toys.

Next, you should spray bitter apple spray on all the things that the puppy should not be chewing.

Finally, if you catch the puppy chewing on the wrong things, stop him, and then hold up a chew toy.

When he takes the chew toy in his mouth, praise him generously.

One thing that you should not do is punish your puppy after the fact. If you find something that he already did, do not punish him. It is too late. Punishing him later will cause even more problems.

​Some puppies will nip you when they are being playful, because they do not understand that it hurts when they bite.

There are several ways to cure this problem.

One is called bite inhibition.

When puppies are small, they like to play together. They wrestle and play-fight, and nip one another. If one of the puppies gets nipped too hard, he will make a high-pitched yelp.

This tells the other puppies that they need to be more gentle.

You can do the same thing with your puppy.

If you are playing with him and he nips you, make a high-pitched yelp and stop the game.

If he tries to continue, say “Stop that!” or something similar, in a stern voice.

If the puppy stops, praise him. Keep practicing, and he will learn not to bite.

If the puppy nips you pull your hand away, and turn away for fifteen or twenty seconds.

This will help the puppy learn that gentle play is rewarded, but rough, painful play stops immediately.

Another habit that many people find annoying is for puppies to jump up on them. Sometimes the puppy’s feet are dirty or muddy, and they leave paw prints on your clean clothes.

Sometimes, they might even cause people, especially older people or children, to trip and fall down.

If you want to break the habit of jumping up, you must remember never to reward a puppy for jumping up on you. Here’s what you can do instead.

If the puppy jumps on you, say firmly, “Off!”

If that does not work, turn away from the puppy when he jumps on you.

Eventually, he will learn that he gets attention when he is polite, but not when he jumps on people.

You can also praise the puppy when you see him sitting politely, without getting excited and jumping on you or others. This will reinforce the good behavior that you are trying to train, because the puppy will learn that being polite is a good way to get attention.

Sometimes aggression means fighting with other dogs, and other times, it can mean growling or snapping at people. Either behavior is problematic.

There are several reasons that dogs fight with each other. You will need to vary your approach, depending on why they are fighting. Let’s talk about a few reasons.

One of the reasons that your dogs might fight each other is because of their social hierarchy. Most of the times, the dog who is starting the conflicts is not the top dog. Rather, it is a junior dog who is challenging the top dog for dominance.

If this is what is going on, you should probably let it run its course. It may sound ugly, but the dogs are probably not going to hurt each other. They just need to establish who is boss.

If a dog does get hurt, you should keep it away from the other dogs while it heals.

One thing that you should not do is intervene, or support the junior dog. This will just make the fighting worse.

It may go against your human feelings of fairness and equality, but you should support the top dog, and make it clear that you will not side with the junior dog. In a few weeks, the conflict should end, as the junior dog gives up.

Sometimes puppies will snap and snarl or growl because they are scared. If you can figure out what is scaring her, you can help her to overcome the fear, or avoid situations which trigger the fear response.

Hopefully, this article has helped you to find a solution to the problems you are having with your puppy, so that you can get back to enjoying “the dog life.”

8 Ways to Engage Your Dog Indoors
Pet Health, Food, and Recipes
Getting Ready For Your New Puppy

How can we help you?
We'll do our best to reply within a few hours or less.
Call Us Now!